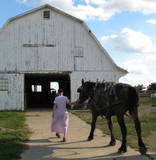 To help my friend, Patty Wysong, celebrate her forthcoming 40th birthday, I'm writing my blog about missions. Missions has been an important factor in Patty's life and she wants to honor that by having her friends blog about either mission stories they've read, or about missionaries they've met. I have met two wonderful missionaries recently and I'd like to tell their story.

Mission to Amish People (MAP) was started by Joe and Esther Keim. Both of them were born into the Old-Order Amish religion in Northern Ohio. Through the mercy and grace of the Lord, they each received the gift of life given to them by the death and resurrection of Christ. Once they became alive in the spirit and mercy of the Lord, they found that their strict Amish family and church were no longer accepting of them or their new-found faith. After much praying, and back and forth pondering about how to proceed, they decided to leave their families and their Amish faith to pursue the liberty and freedom of knowing Jesus...following His plan...learning of Him anew, and finding joy in living without the stricture of the Ordnung.

This decision cost them their relationships with their families and with all they knew before. They entered the world of the English and, through the help of people who had been called by the Lord to be there for them, they got on their feet, established a loving home, and proceeded to move forward in their new faith. But as Joe shared today in his sermon, the pull of those he left behind...the knowledge that his family and Esther's did not know the same grace they did...and the call of the Lord to be a mission to the Amish, kept creeping into Joe and Esther's hearts. Finally, with counsel from their pastor, they decided to enter the mission field.

This mission field has familiar American attributes to it: rolling farms and traditional family structures; wholesome and healthy foods nurturing hard-working and peace-loving men, women, and children; and quaint old-fashioned communities working together to get through life. But the strict religious adherence to the Ordnung also makes this mission field as foreign to most Americans as any hinterland found on exotic continents far from U.S. shores.

Entering the mission field to the Amish is at once difficult and easy. There's a facade of friendly and cheerful naivete that sharply juxtapositions with a shadowy, distrustful distance of things and people of the English world. Who better to bring the gospel to this self-imposed exiled community than those who have once been so much a part of this religion? Seems God knew what He was doing when he placed this calling on Joe and Esther's hearts many years ago.

They have been a refuge for others who have made the same difficult decision to leave their homes and families. Joe and Esther have been instrumental in setting in motion ways to mentor, aid, and spiritually guide these ex-Amish into the modern and often confusing world of the English. But that is not what burdens their hearts the most. No. In everything they do, and in everything they say, there is a never-ending desire to bring their people to the same altar of grace and love that they found so many years ago at the cross...at the feet of their Savior and Lord, Jesus Christ.

They are infected with the virus of their mission from which they seek no cure, and the power of their calling causes them to be poured out, like their brother Paul, as a drink offering to the Amish who so desperately need the light and grace of the Lord.

Each moment I spend with them, I realize more and more that their calling to the Amish mission field is a life-long and hope-filled service. They have been instrumental in showing the love and grace of Christ to many. Their ministry gives God's life-saving Word to countless Amish, and their dedication and heart cries keep them going before the Throne...holding up their Amish neighbors to the Mercy seat...bringing light and salt to an often dark and rule-bound community.

When the Lord placed His call of mission to the Amish people in Joe and Esther Keim's hearts, He surely knew that He had chosen servants with unending zeal and love. Their dedication and perseverance are inspirational to many. If you'd like to learn more about their ministry, please go to Mission to Amish People. Their website is packed with information about the Amish as well as ministry opportunities, testimonies of ex-Amish, and ways to help them continue their God-called mission to the Amish.

May God continue to bless Esther and Joe Keim's efforts to further His kingdom among the Amish.

2 Timothy 4:1-7:
In the presence of God and of Christ Jesus, who will judge the living and the dead, and in view of his appearing and his kingdom, I give you this charge:Preach the Word; be prepared in season and out of season; correct, rebuke and encourage–with great patience and careful instruction. For the time will come when men will not put up with sound doctrine. Instead, to suit their own desires, they will gather around them a great number of teachers to say what their itching ears want to hear. They will turn their ears away from the truth and turn aside to myths. But you, keep your head in all situations, endure hardship, do the work of an evangelist, discharge all the duties of your ministry.
For I am already being poured out like a drink offering, and the time has come for my departure.
I have fought the good fight, I have finished the race, I have kept the faith. Now there is in store for me the crown of righteousness, which the Lord, the righteous Judge, will award to me on that day–and not only to me, but also to all who have longed for his appearing.

Dee, thank you for helping me celebrate!! It was so wonderful to 'meet' Joe and Esther after hearing you talk about them and their ministry so much! Thank you! What a ministry. And God tailored them just for that. SO cool!

Praying with you, SweetDee!
Huggles!

Oh wow, Dee. I know you've mentioned them to us before, but this detailed "introduction" showed me what a ministry, and mission, this is. Wow. Praying.

What a beautiful post, you've shared with us! Your friends have a powerful testimony and calling. I think it's sometimes easy to forget the mission fields here at home. Thanks for sharing this. Blessings!