Friday Fiction: The Year of the Hoods 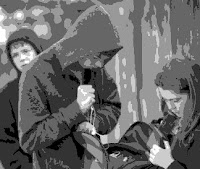 Here's my contribution to Friday Fiction this week. For more great fiction, go to Lynda Schab's On the Write Track .

The Year of the Hoods

Just the light from the bus driver’s radio lit the front door area as I climbed the steps of the school bus. Jerry kept CKLW cranked up loud as long the kids maintained a semblance of control. Jefferson Airplane wailed out the questions, “Don’t you want somebody to love? Don’t you need somebody to love…”

The only seat on the bus that was EVER available by the time it got to me was at the back. The good kids, the ace students, and the jocks never dared sit there. The back was Hood area. My face blushed crimson when the hooting and teasing started as I approached.

I pulled my coat close and sat down next to Vincent. He grinned and proceeded to pass a joint to his friend in the seat ahead. I tried not to look, but Vincent saw my eyes widen and he chuckled.

“Little Miss, they’re gonna think you’re just like me if you keep on sittin’ here.” His smile was genuine and a little flirty, but I kept my head down and shrugged.

“Vince, throw me that straw on the floor there.” yelled Mike. Vincent threw it to him and watched as Mike pulled a pack of needles from his jacket pocket. He made spit wads and poked each one with a needle before placing it in the straw. Then the torment began. He hit a jock first, right in the back of his head.

“Ouch! Who did that?” The jock’s face grew red with anger, but he turned back around when he heard the jeers from the Hoods.

One after another, Mike picked out his targets and inflicted his own little sting of humility. I felt the sorriest for the computer geek who sat just a couple of seats in front of the Hoods. His ears burned bright red as he pulled his jacket over his neck to protect himself. The taunting increased and was aimed singularly at him.

I felt anger rise in me and I dared to flash a look of disgust at Vincent. He stared back calmly, but with a hint of surprise at my attitude. He leaned close and when he whispered, his breath blew a warm puff on my cheek.

“He’s a nerd. Nerds have to learn to take it, Girlie.”

“I don’t care. It’s mean.” I whispered back. “Why can’t you make Mike leave him alone?” It was the first and only real conversation I ever had with Vincent, and I could see he was shocked. I thought he might soften. I saw a little hesitation as he glanced at the poor kid being tortured by his buddies, but then he laughed.

“Hey, Nerdie! Little Girlie’s feelin’ sorry for ya!” he yelled. The Hoods increased their sarcasm and teasing until the noise level crowded out the music. Jerry immediately turned the radio down and met the eyes of the Hoods in his rearview mirror.

“Cut it out, Dudes, or the radio stays off! If I see anything else going on back there, I’m taking names. You got that, Vincent? Keep that pack of yours under control!”

“Yessir, Mr. Bus-Driver-Man,” Vincent stood up and saluted. The Hoods laughed, but the torture ceased, at least for that morning.

I rode the bus with the Hoods that school year. Vincent never tried talking to me again, but sometimes, he’d catch my eye, shake his head and give a little smile. I put Vincent down on my prayer list, his name written neatly on the front flap of my “The Way” Bible.

Summer came and I often saw Vincent walking the streets near my house. If he spied me, he’d call out with a huge wave of his arm, “How ya doin’, Girlie?” I heard rumors that he’d joined a gang. My prayers for Vincent increased.

One day, just before school started again, the newspaper told a horrible story. Vincent was gunned down as he walked the streets; a tragic case of mistaken identity. I felt sick. In my head was the image of Vincent, with his wide grin and exuberant wave.

The first day of school, I got on the bus and everything was the same, only it wasn’t. I made my way to the back and took my seat alone. The Hoods were gone. Only one remained, and he wasn’t inclined to torture. The computer geek, Roger, turned around and gave me a smile, but I felt incredibly sad.

this is great, Dee. Takes me back to school days... You have such a gift for short story fiction. Great job.

Very genuine, and very believable. The ending gives it a very realistic feel.

I remember "The Way" Bibles, but I was too young to have one. Was just learning about Bibles myself at that time.

I like the lesson here. Pray for your enemies.

Wow...I guess I had a rather sheltered existence when it came to the whole school bus experience. Glad it wasn't like that for me. Very believable and well-written.

So real, and such a compelling story. Excellent stuff!

In my day we rode the tough bus and this is very true to what I remember. Excellent job. The ending haunts, and that's a sign o a well told story.

Oh Dee, I could feel this one--you really have a gift! So good!