My Boomer novel, The Whole World and All, due to be published this year, is set in the 1960's. The beginning of my main character Annie's story is set in 1966.

How many of these 1966 events do you know about? (Or have even heard of? 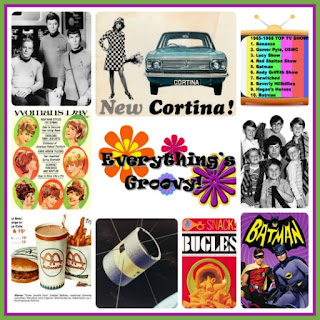 1966 The U.S. launched its first weather satellite, ESSA-1.
1966 'Summer In The City' by the Lovin’ Spoonful hit #1 on the charts.
1966 Mississippi is the last state to repeal Prohibition.
1966 The first episode of the TV show 'Star Trek' airs. Chemically synthesized food on the Enterprise - we seem to be getting close to that now.
1966 Simon and Garfunkel release their album, 'Parsley, Sage, Rosemary and Thyme'
1966 Ingredients are required to be listed on food packages. The first Truth in packaging law.
1966 American Roman Catholics are no longer required to abstain from eating meat on Fridays.
1966 Quaker Instant Oatmeal is introduced.


More to come as my novel progresses closer to its publishing date, so stay tuned!

Email ThisBlogThis!Share to TwitterShare to FacebookShare to Pinterest
Labels: 1960's, Boomer novel, Dee Yoder, The Whole World and All