God Looks at the Heart 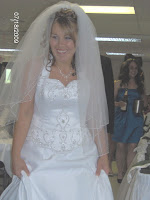 A couple of years ago, we were privileged to witness the first of several weddings of two of our former-Amish friends. The bride was beautiful and the groom was handsome. They began their service with their pastor asking the wedding guests to give the bride and groom the best present ever: a heart that is turned to Jesus!

It was very unusual, but very touching, since this couple knew there would be many former-Amish friends attending the wedding who needed to hear the gospel and may not have not yet given their heart to the Lord.

It's funny, but when I saw the bride, gorgeous and shining in her white satin with sprinkles of sequins and bows, I thought about how I'd not recognized her once when I saw her in her Amish clothing. She looked so different. My brain super-imposed more than just clothing on her and I didn't recognize the person hidden beneath the Amish Ordnung's rules of dress.

One former-Amish friend said since she has been wearing her Englisher clothes, she walks among her Amish neighbors at farmer's markets and they don't even know her. While she shops, she is careful not speak to the Amish vendors too much for fear they will recognize the hint of Pennsylvania Dutch accent that still remains in her speech. But it is evident her outward change in appearance has shadowed her true identity to those who used to know her.

When we look first at the outward garb of people, we often see what our brain thinks it will see: Amish clothing brings images of purity and simplicity. The more I know the former Amish, the more I realize the Amish world is often complicated and filled with layer-upon-layer of issues that sometimes create chaos in this simple seeming lifestyle.

We have to learn to not let the outwardly appearance of order and plain living in this multifaceted culture blind us to the needs of the people who are donning the apparel. The Amish are humans beings with all the foibles and troubles the human race encompasses. Their souls ache for unity with their Maker, just as any person's soul does.

The best thing we can do for the Amish is to support them in prayer and be a friend when they are in need. As Believers let's be open to offering the bread of life and living water for parched Amish souls, just the same as we would to anyone else who shows signs of spiritual hunger and thirst.

We need to remind ourselves of God's words to us about judging others (good or bad) only by appearance:


John 7:24
"Stop judging by mere appearances, and make a right judgment." (Jesus' advice to the Jews with Him at the Temple)


Galatians 2:6
As for those who seemed to be important—whatever they were makes no difference to me; God does not judge by external appearance—those men added nothing to my message.


Colossians 2:23
Such regulations indeed have an appearance of wisdom, with their self-imposed worship, their false humility and their harsh treatment of the body, but they lack any value in restraining sensual indulgence.


And finally, let's consider how our Lord Jesus, the Coming Messiah, was described in Isaiah 53:2:


He grew up before him like a tender shoot,
and like a root out of dry ground.
He had no beauty or majesty to attract us to him,
nothing in his appearance that we should desire him.

Nothing in His appearance that we should desire him. That speaks volumes about human ability (or lack thereof) to know the heart, the soul, the spirit, and even the deity of our Savior, simply by outward appearance alone.

Let's purpose to see each person as God sees them: souls that need to be reconciled to Him. Let's open our eyes to what may lie behind the simple dress of the Amish and be willing to bring the Good News to them, as we would to any neighbor or friend.

SO easy to judge by appearances - whatever that appearance might be. Thanks for this reminder, dear Dee.

Thanks, Jo. Yep--we do both: judge by looks both ways!

It's really funny, but when I lived in Holmes County, Ohio it never even occurred to me that Amish people might be living in bondage with their attire and rules. I knew Amish people that were not saved, but I did not think of them in any other way than I might think about many other denominations that have people that I know are not saved.