Meet Ira Wagler, Author of "Growing Up Amish: A Memoir" 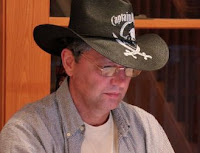 Ira Wagler, like many former Amish, had a story to tell about his journey with his heritage. He always knew he had a desire and ability to write his personal story, but even he was happily surprised with how his book came to be published. The result, his book: Growing Up Amish: A Memoir.

In a recent phone interview with me, Ira shared he was compelled to write about his growing up years as an Amish young man when his “world imploded” in 2007. He began with a blog. Over the course of time, his writings were noticed by a friend which led to a meeting with an editor at Tyndale House Publishers. One thing led to another, and he was offered a contract.

Ira is no stranger to literature and writing. He earned a degree in English, but his inspiration for writing comes from reading classic books from authors such as Thomas Wolf. He later went to law school and earned his law degree.

Ira acknowledges that “having the right people around me, helped me be published.” He feels he received his gift of writing from his father, who was a contributing writer to the Amish magazine, Family Life, but he feels his sensitive heart comes from his mother. He dedicated his book to her.

One of the most surprising aspects of being published, Ira states, is the “absolute professionalism of Tyndale House.” He is especially grateful to his editor, Carol Traver, who was able to keep Ira’s writing voice intact, while offering edits that made his story stronger.

There are three particular sections of his book he found difficult to write, but are powerful elements of his personal journey: his older brother’s accident, his younger brother’s leave-taking from home, and his relationship with an Amish young lady. All three incidents had a profound impact on his life and carries emotional memories he will always retain.

He is satisfied with the results in his book and feels the story is told with a balance of both the difficult and positive aspects of growing up Amish. He made a concerted effort to tell his story with fairness, and yet still bring out the strong emotional elements of each situation he describes.

When asked if he had any advice to others who have left their Amish culture behind, he offered confidence that with the work ethic instilled in the Amish, he knows any former Amish will be able to apply that urge to work toward anything they are willing to try. He said that he entered college “scared to death”, but he was able to succeed. He entered law school just to “see if I could do it”.

When asked if he is planning to write another book, he replied “the market will decide that”, but he wouldn’t mind writing a sequel and/or a novel.

His writing routine is anything but routine (which gives hope to a routine-less writer like me!). He thinks he works best under deadline pressures.

And that is just what he's done. Beautifully. I highly recommend his book to those who enjoy Amish stories or to anyone who wants to read an incredibly honest and touching account of his journey.


Ira’s book can be purchased at:

Here’s a sample from Ira’s book:

“One fateful, starless, April night, I got up at 2:00 a.m. in the pitch black darkness, left a scribbled note under my pillow, and walked away—all my earthly belongings stuffed in a little black duffel bag.

Seventeen years old, bound for a vast new world. In my eager mind, the great shining vistas of distant horizons gleamed and beckoned. A world that would fulfill the deep yearning, the nebulous shifting dreams of a hungry, driven youth. And it would be mine, all of it, to pluck from the forbidden tree and taste and eat.

I could not know that night of the long hard road that stretched before me.”

SO interesting! Thanks for bringing this author, and his story, to light, dear Dee.

Thanks, Jo. He has a wonderful writing voice and is able to take the reader to the scene. Great bio.

This sounds terribly interesting. A young man from our church just got picked up by Tyndale House. He's got an amazing story (route to publication) as well!