Bugs Do a Lot of Nothing 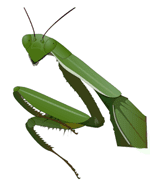 Did you ever notice how bugs do an awful lot of sitting around...doing nothing?

My son and I captured male and female praying mantis's yesterday. We put them in our bug vivarium and watched them. The female spent the first hour or so pouncing on the male every once in a while, but other than that, the bugs just sat. Or clung, if they were at the top or sides. We kind of got enough of her sudden and disturbing pounces on the hapless male, and we'd read that hungry females can start eating their mates, so we decided to put another food source in there.

We procured a maimed, gigantic mosquito and dropped him through the hole. Still nothing. The male swiveled his triangular and alien-shaped head when the female came near, but otherwise, no action. Tsk.

I kid you not...this inaction on the part of the bugs made me think about God and me. I'm in His vivarium (earth)...He's watching my life...is He seeing any action?

Therefore, prepare your minds for action; be self–controlled; set your hope fully on the grace to be given you when Jesus Christ is revealed. 1 Peter 1:13

Yowza! What a sucker punch at the end there. Incredibly effective way to get His message across. Love it, Dee.

It's easiest to do nothing, isn't it? What an amazing message you got from playing with bugs ;). Praying to do more than "a lot of nothing" for Him as He watches me.

smile.... so that's what you do all day...sit around watching bugs do nothing !

We had a bunch of monarch butterfly caterpillars in our classroom once. We didn't get much done in the days that they started emerging from their chrysalises.

Great message! It is easier to do nothing, isn't it? But rarely is the easy thing, the right thing. Thanks for this powerful reminder. Blessings!

Oh my, Dee. No worries there. You are full of action for God. I got to see it up close and personal this summer. You truly do have a heart for the Lord.

Love this blog and am SO glad the female didn't do her dirty deed, or did she?